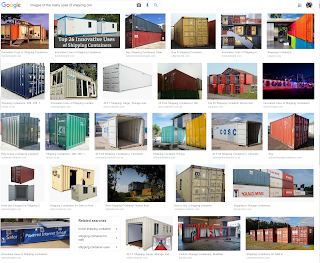 Images Of The Many Uses Of Shipping Containers

In addition to creating a new kind of autonomous, ducted fan, lifting unit (or as I like to think of it, a singular, fully gimbaled, flying tug thruster, which could attach to common mount sockets, that all new cargo containers should have, forthwith), which would allow my Hybrid Dirigible Blimp Trains the luxury of never needing to land, to unload, or reload, we also need to consider a few changes to the container itself.

First should be the dictum that if it can be done with a natural fiber, any load bearing thing that can be constructed with it should be used instead of metal. And this, most especially, when you start thinking in terms of lighter than air transport.

Even if we didn't go to lighter than air, though, I would still make that recommendation because, in addition to having more incentive to pull more carbon out of the air (via photosynthesis), we are going to need to realize that, at some point at least, the amount of various metals we will have, for any practical use, will become quite fundamentally finite, well before all sources of any of them actually cease to be found on planet. Which means we will have to shepard our recycling of most of them very carefully, in the decades to come; and even with something as regionally abundant as iron, and steel, might be for us (for both environmental, excavation limiting reasons, as well as our potential need to trade significant amounts to others for things they have that we don't).

Then, of course, should be the dictum of multi use flexibility. As we have already seen, people have been putting the current steel configuration to an amazing array of uses other than just to carry things, in a common way, so that ships, trains, and trucks can handle them (as in instant walls, living spaces, and a host of other things).

So, in that vein let us begin.

To start, in my opinion, the things should be structurally capable, as in stackable, regardless of what side, and end panels are desired. Then, if need be, you could also have certain panel configurations made specifically to add to that load carrying capacity.

Obviously, then, you open up reconfiguration in a big way when you don't have to cut wall sections out that, also, might weaken the things. And, of course, the panels themselves could then be standardized for a further host of applications, and very specific requirements. Perhaps providing you with extra things you might be able to do requiring states like pressurization, or special fluids handling, with an inherent, automatic, biochemical protection capability. with everything being pre manufactured with all requisite electrical, and normal wet flow channels, already included in the panel interior.

There's also one other simple thing that has always surprised me about shipping containers. Why hasn't anyone come up with easy to snap in place (as well as remove when necessary), mats that would have the rollers you see on the floors of cargo planes. Rollers that would make rolling things on, and off, the container a whole lot faster.

And in conjunction with that should be the one other thing that would make this really neat, to be put in, if only, at least, as an option: an arrangement of concealed pulleys, and pull load capable wire, that would allow anyone with an outside winch to engage a traversing (along the long axis) push plate; a push plate that would simply push, from the back, all of the palletized cargo in the container out onto receiving roller mats, one might place on the ground, without anyone having to get into them to do it by hand.

Can you imagine how fast anybody, the military included, could unload pallets, and then get the empty container out of the way for the next one, to be unloaded? And then having the same flexibility for reloading them and getting them back up to the waiting Dirigible Blimp trains?

Something to think about if you are still wondering about the useability of Hybrid Dirigible Trains in the first place. Or that they wouldn't have a chance to radically revolutionize how we do air transport now. 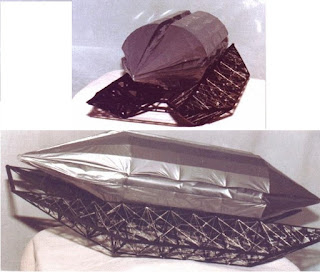 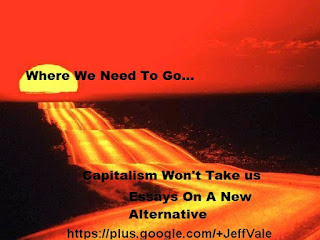